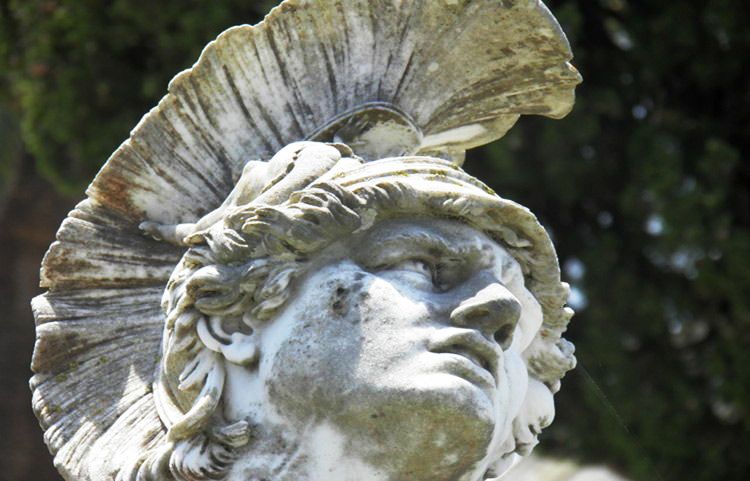 According to tradition, the modern Greek name for the island – Kerkyra – came from the Nymph Cercyra (or Corcyra in the Doric dialect), who was the daughter of the river-god Asopus.The god Poseidon fell in love with the beautiful maiden, abducted her, and lay with her on the island. The fruit of their union was Phaeax, the mythical primogenitor of the Phaeaceans who lived on Corfu in antiquity. According to another version of the story, the name of the Nymph Cercyra is cognate with the demonic ancient deity Corgyra or Gorgo. This view has been reinforced by the discoveries made at a temple of Artemis found near the capital of the island: on the pediment of the temple was a depiction of precisely this demon Gorgo , who may well have been a kind of mythological forerunner to Artemis herself. Many other names are used for Corfu in the literature of the ancient Greeks.

Its length caused it ot be called Makris (= long) and its shape Drepani (= sickle). According to information preserved by Hesiod and Apollonius from Rhodes, the name Drepane was connected with the creation myth involving Cronus and Zeus. During the Middle Ages, the name Corypho (from ‘coryphi’, a peak) came to be used for the twin peaked acropolis occupied by the Old Fortress of Corfu town, to which the city had been confined after a raid by the Goths in the sixth century AD. This name was the origin of the nomenclature Corfu, by which, of course, the island is known today everywhere in the world except Greece. A still earlier name is given by Homer, in the Odyssey: Scheria, the famous country of the Phaeaceans.